The “Ajin” are a new type of immortal human, being pursued by agents of the Japanese government. The battle between the two forces is told through realistic action and accurate psychological descriptions in the action-survival-suspense smash hit Ajin: Demi-Human (Gamon Sakurai, currently serialized in Kodansha’s good! Afternoon). Ajin: Demi-Human will be shown as a unique trilogy of animated features, the first to be released November 27 (Fri)!
Also, the theme song for the films and TV series has been announced and will be performed by flumpool - who previously provided theme songs for MW (2009), based on the manga by Osamu Tezuka, and the live-action film Kimi ni Todoke (2010), also based on a popular comic. Now they bring us their third movie theme song Yoru wa Nemureru Kai? (“How Do You Sleep?”) (A-Sketch); please check it out at theaters!

The film will be showing at TOHO Cinemas Shinjuku and 30 more theaters throughout Japan for the limited time of two weeks. For details, please see the official site.

* Not available at all theaters.

* Vol.2 presale ticket gift is scheduled to be limited-edition clear file with original art from the artist, Gamon Sakurai”. 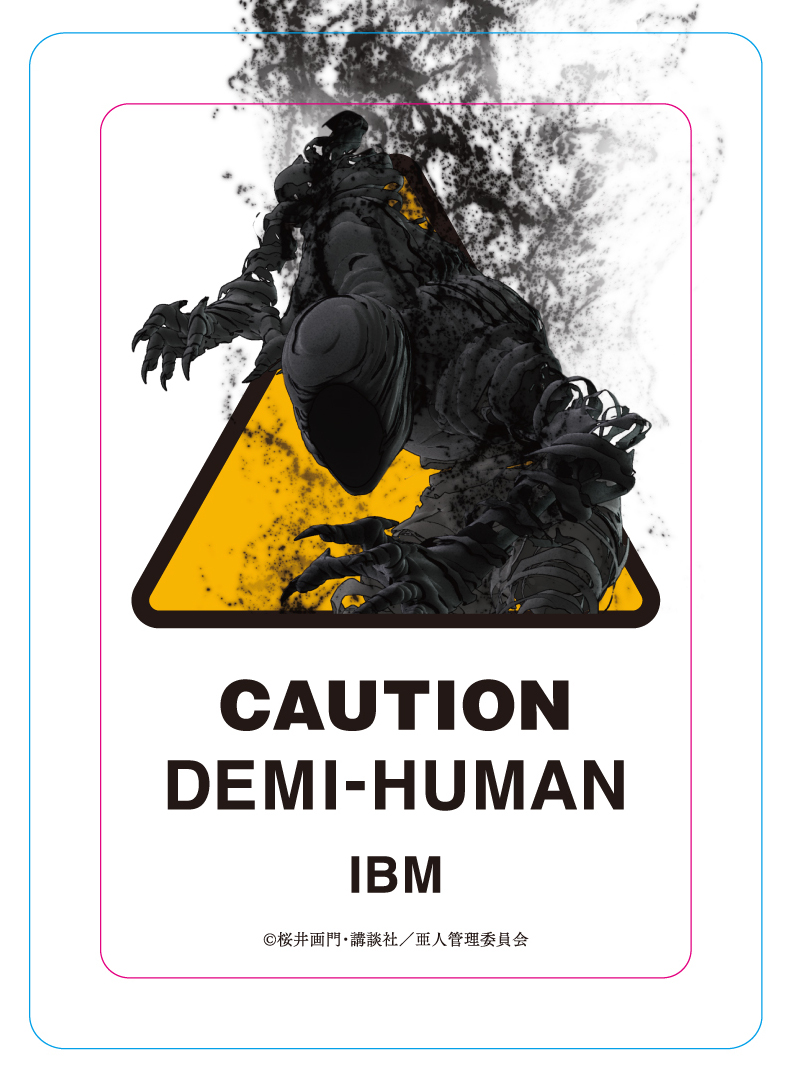 The “Ajin” are a new type of immortal human, being pursued by agents of the Japanese government. The battle between the two forces is told through realistic action and accurate psychological descriptions in the action-survival-suspense smash hit Ajin: Demi-Human (Gamon Sakurai, currently serialized in Kodansha’s good! Afternoon, total sales of over 3.2 million copies), which will now finally be released as an animated feature! The film adaptation is being directed and co-directed by Hiroyuki Seshita and Hiroaki Ando, bringing their experiences in the tireless recreation of visuals and action scene depictions in Knights of Sidonia. The script by Hiroshi Seko, who brought us the tension and unease of the original manga in the adaptation of Attack on Titan, faithfully recreates the extreme action and conflicted characters of Ajin. Also music by Yugo Kanno, who has been involved in JoJo’s Bizarre Adventure: Stardust Crusaders, Psycho-Pass, among many other works, further brings out the vibrancy and tension of the story.
Finally, animation production is being handled by Polygon Pictures, the Emmy and Annie Award-winning studio whose revolutionary animation techniques were responsible for the acclaimed Knights of Sidonia.
This full production team is now lending their strength to the action-survival-suspense smash hit, Ajin: Demi-Human.
The curtain opens on the story of a normal high school student who suddenly finds himself on the run from all humanity after discovering he is a new type of immortal human – an Ajin. 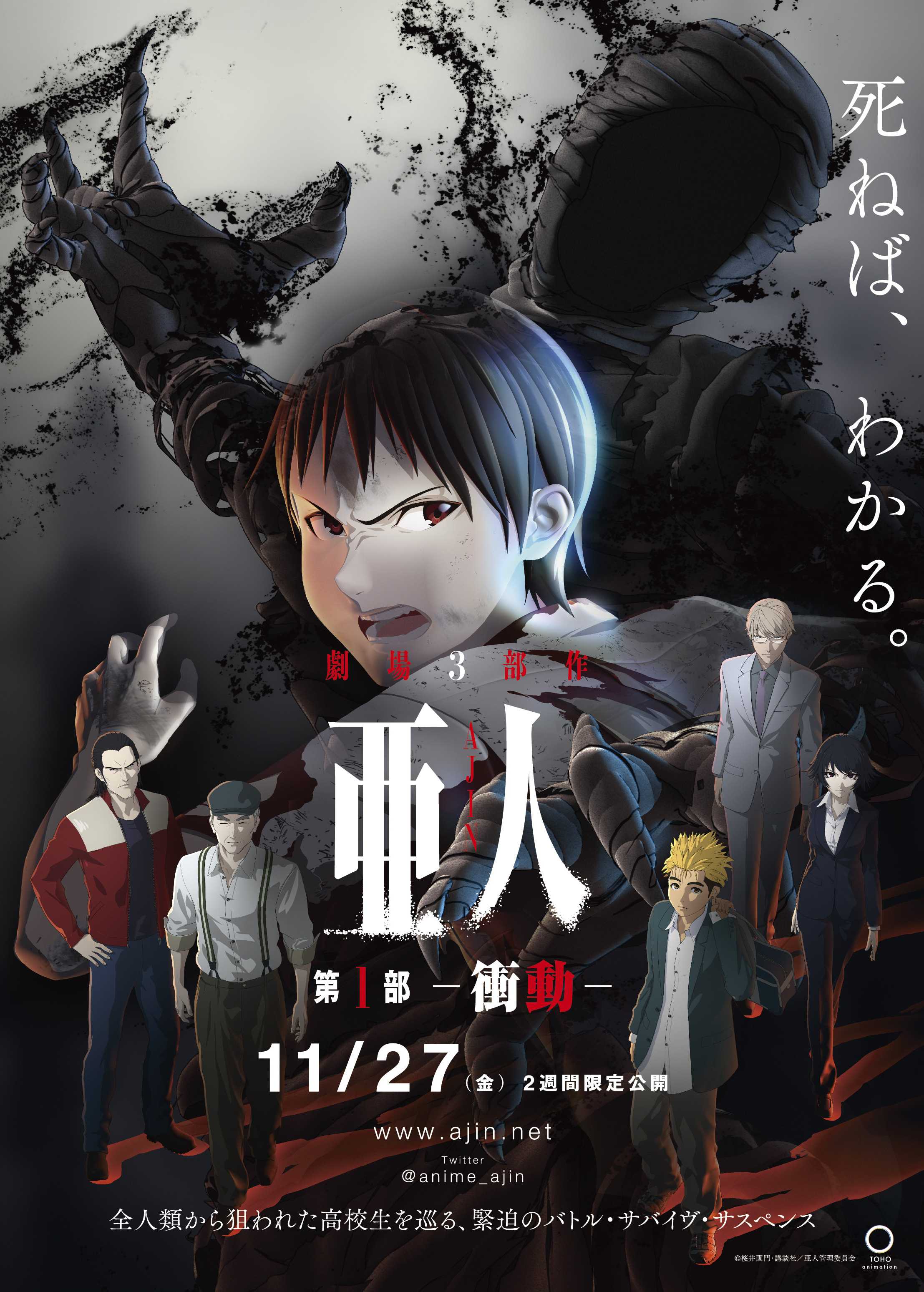 17 years ago, Africa.
A seemingly immortal soldier, nicknamed a “soldier of god”, is captured by the US military. This was the moment the world learned of the existence of immortal “demi-humans”, or “Ajin”. If killed by any injury or disease, their bodies will almost immediately regenerate and return to life in perfect health. One of humanity’s greatest dreams realized… and potentially unlimited economic benefits.
Since then, 46 Ajin have been discovered around the world, with 2 in Japan.
However, as one can never know if they are an Ajin until they die, discovering them is difficult, and there are no doubt more unknown Ajin hiding around the world. High schooler Kei Nagai is hit by a truck and killed while leaving school. However, moments later he returns to life. Now identified as the third Ajin found in Japan, he finds himself on the run from the police and the government’s Ajin Control Commission, not to mention normal civilians hoping to receive a cash bounty. With the help of his childhood friend Kaito, Kei manages to escape into the mountains, but the police search net draws closer and closer. A new escape plan is needed.
Meanwhile, the second Ajin discovered in Japan, Tanaka, has been rescued from the government’s custody by a man known as “the Hat”.
These fugitives begin to plot a terrorist campaign to exact their revenge on humanity. The Ajin Control Commission’s representative, Tosaki, has been tasked with capturing Kei Nagai and putting a stop to the other Ajin’s terrorist plans. His eyes fall on Kei’s sister, Eriko Nagai, as a lead in the search for her brother’s whereabouts.
However, the mysterious “black ghost”, known as an IBM, of another of the Ajin has already snuck in…