"Muybridge's Strings", the latest highly anticipated film by animator Koji Yamamura,produced in partnership between PPI, the National Film Board of Canada (NFB), and NHK, will be screening from September 17th (Sat) through October 7th (Fri) at the Tokyo Metropolitan Museum of Photography.

This is the first film independently distributed and promoted by PPI.
Weekday daytime screenings are available at the low cost of 500 yen and you are free to stay for repeated viewings. (*No re-admittance.)
The film will be shown with a variety of other exciting works.Check the official homepage, Twitter, or Facebook for more details.
The film has a limited three week run in Tokyo.
We hope to see you there!
We are also actively searching for screening partners. Please drop us a line if you're interested. 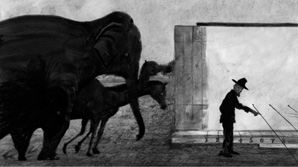