The work will also be presented as part of the Dwarf Animation Festival, an event which brings together the various characters and creations of dwarf inc. (Chairman: Tsuneo Goda, Head Office: Nerima-ku, Tokyo). Screenings will be held from December 31, 2011, at United Cinemas locations nationwide.

"PLUG, THe NeW WORLD," is an animated short featuring "PLUG," a character developed jointly by Nissan Motor Company and dwarf. A stunning fusion of CG and stop-motion animation, the work has won high praise worldwide.

At PPI, it is our goal to produce top-quality, creative work. As such, we strive to constantly challenge ourselves to participate in projects like this one that use the newest technologies and innovative techniques.

The character "PLUG" is the result of a collaborative development between Nissan Motor Company and dwarf.
A special video series featuring the character, called "PLUG, OUR NeW World" (Dir. Tsuneo Goda), was unveiled online as part of the promotional campaign for Nissan's zero-emission vehicles.
NISSAN Zero Emission: THE PLANET ZERO http://the-planet-zero.com/ 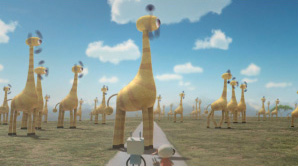 About the Dwarf Animation Festival

The Dwarf Animation Festival presents moviegoers with the chance to see back-to-back screenings of "PLUG, THe NeW WORLD" and other short works featuring dwarf's many beloved character creations. For more information about the program and theater locations, visit the festival's website at http://www.dwarf.co.jp/festival.html 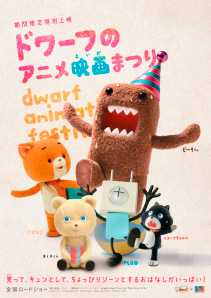 dwarf is a character development and animation studio founded in September 2003 by animator Tsuneo Goda, who is best known for creating such characters as NHK's "Domo-kun." In addition to Domo-kun, the studio has produced many works popular with all generations including "Komaneko," as well as "Boku wa kumo" for NHK's program "Minna no Uta."
For more information, visit the website at http://dwarf.co.jp/

As part of the Amana Group, under the umbrella of amana holdings inc. (President and Representative Director: Hironobu Shindo, Head Office: Shinagawa-ku, Tokyo, Securities Code: TSE Mothers 2402), PPI is actively involved in the business of digital contents creation.
In addition to being one of the first Japanese companies to create CG animation for multiple long-form TV series in the United States, PPI produces digital content for films, video games and exhibitions, as well as managing intellectual property licensing. The production studio brings together over 300 creators from around the world, who pool their talents to bring forth new contents.
By fusing its unrivaled CG know-how with the internationally recognized quality of the Japanese animation industry, PPI is on the way to becoming a leading company in the contents business.
For more information, visit our website at http://www.ppi.co.jp.