Polygon Pictures ("PPI," President and CEO: Shuzo Shiota, Head Office: Tokyo, Japan) is proud to announce the release of the animated feature film BLAME!, produced by PPI and directed by Hiroyuki Seshita, which will begin showing at cinemas nationwide from May 20, 2017. Originally serialized in Kodansha's Afternoon magazine from 1997 to 2003, BLAME! was the debut work of Tsutomu Nihei, who went on to win the 39th Kodansha Manga Awards for Knights of Sidonia. Tsutomu Nihei's visionary debut, which has continued to inspire creators around the world will be released!

The release date for the animated feature film BLAME! has been confirmed!
A two-week limited run in cinemas nationwide will begin from Saturday, May 20th, 2017.

The main visual for this film has also been released, in the lead-up to its release. It shows Killy the Wanderer and 4 other characters against the backdrop of the enormous,
multi-leveled city.
In addition, the main trailer has now been released（https://youtu.be/_k75jXSruSs）! Please take a look and soak in the atmosphere!

Details on the main cast of BLAME! have also been revealed.
Killy the Wanderer, on his quest to find the Net Terminal Genes, will be voiced by Takahiro Sakurai; Cibo, the scientist who helps Killy on his mission, by Kana Hanazawa; Zuru, the girl whose village is threatened with extinction, by Sora Amamiya; Pop, the leader of the Electro-Fishers who protect the village, by Kazuhiro Yamaji; Sutezo, an Electro-Fisher and Pop’s right-hand man, by Mamoru Miyano; and Tae, young Electro-Fisher and Zuru's closest friend, by Aya Suzaki. This acclaimed cast will be bringing the world of BLAME! to life.

Details on the main staff have also been released, with music by Yugo Kanno, known for his work in film, television, and animation, and theme song performed by angela, beloved by fans for their characteristic, rich musical style.

Finally, special advance tickets will go on sale at cinemas nationwide from Saturday, February 25th!
These come with a bonus gift of large BLAME! word stickers!
Numbers are limited so be sure to get yours soon!

All of this information has now been revealed in the lead-up to the May 20th release date!
Be sure to keep an eye out for more BLAME! news! 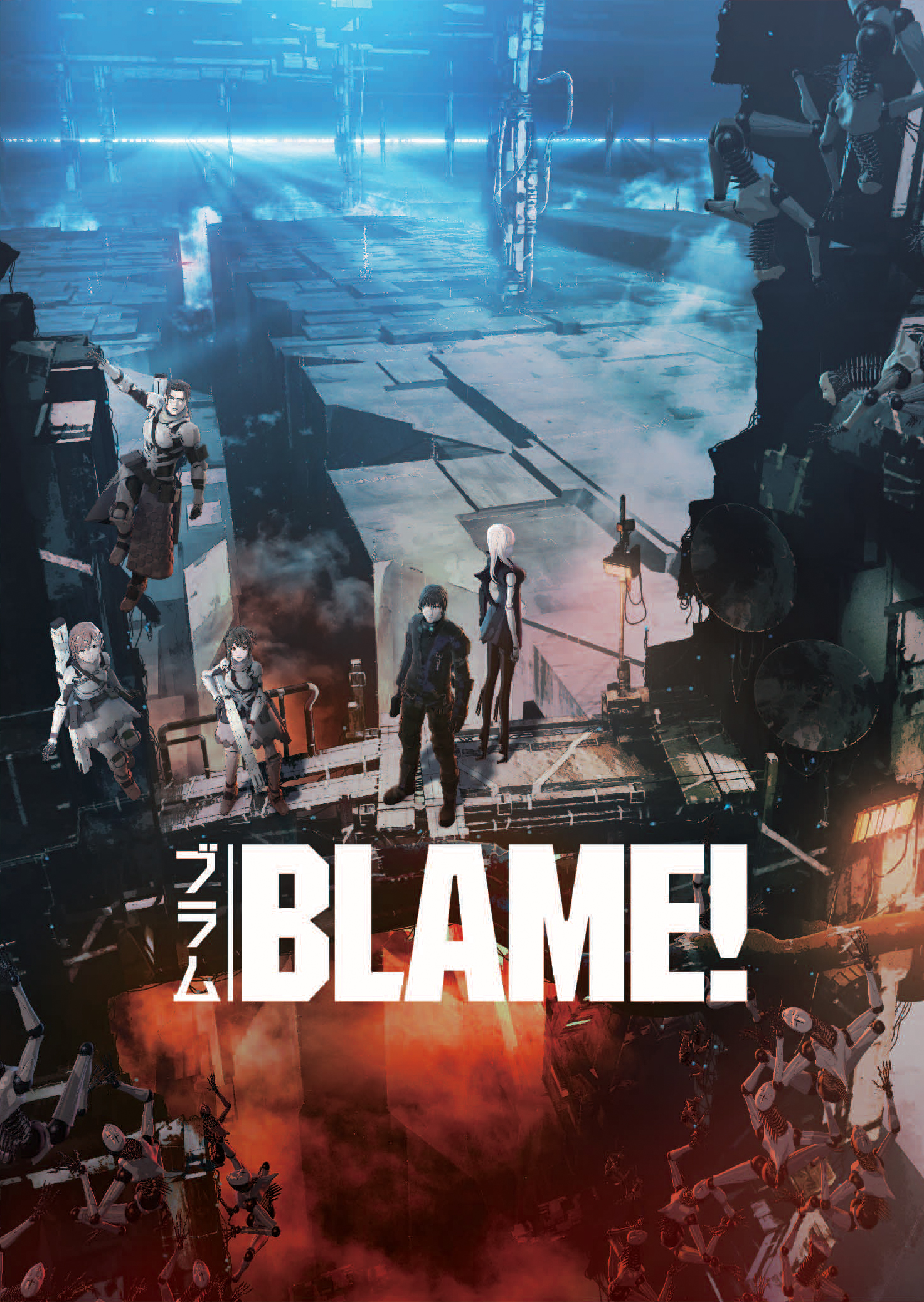 Special advance tickets will go on sale at cinemas nationwide from Saturday,
February 25th!
These come with a bonus gift of large BLAME! word stickers!
Numbers are limited so be sure to get yours soon!

* Bonus gift only available with ticket purchase from cinema.
* Please see official site for list of participating cinemas.
* Final product design may differ from image shown.
* Two rounds of bonus gifts for advance sales are planned.
* Supplies are limited; offer will end when supplies are gone. 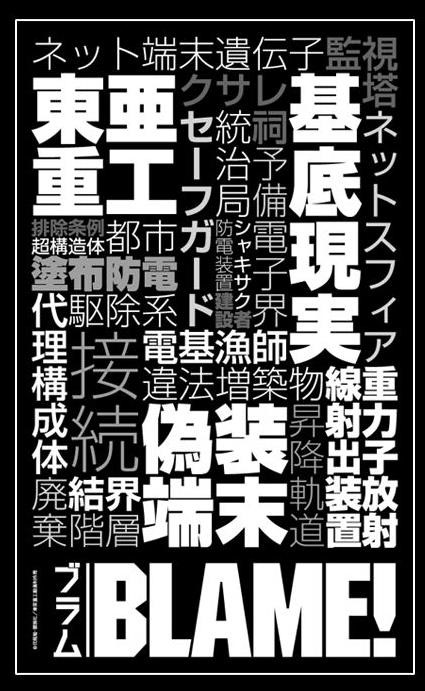 
Introduction
Tsutomu Nihei's visionary debut, which has continued to inspire creators around the world.

Humanity faces purges and extermination in a dark future, and a wanderer named Killy must carry out a solitary, dangerous mission through a mammoth multi-leveled "city" that continues to expand forever in the masterpiece SF manga BLAME! (from Kodansha's Afternoon magazine). The unique setting, unfathomable scale, and hard, heavy action garnered acclaim from directors and artists both in Japan and abroad, creating hopes that against all odds, a film adaptation might one day happen. Now, twenty years after the original comic began, an animated feature-length film is about to be unleashed upon the entire world.
Directing the film will be Hiroyuki Seshita, who brought the world the complex, hard-SF battles of Knights of Sidonia and the speedy, thrilling suspense of Ajin: Demi-Human. Animation will be handled by Polygon Pictures, known worldwide for their award-winning work on shows like Star Wars: The Clone Wars and Transformers Prime, as well as the epic Knights of Sidonia series. On top of that, original creator Tsutomu Nihei is providing full creative direction to the project, handling script and character design.
With the staff of the visionary Knights of Sidonia reunited and the executive supervision of story creator Tsutomu Nihei, BLAME! is ready to shock the world once again with an
all-new story!


Story
In a future where technology has run rampant,
humanity's only hope rests on a lone wanderer.