BLAME!
Selected to be screened at Annecy, the world’s premier animated film festival, born from the Cannes International Film Festival!

Polygon Pictures ("PPI," President and CEO: Shuzo Shiota, Head Office: Tokyo, Japan) is proud to announce that the animated feature film BLAME! (Director: Hiroyuki Seshita), which will begin showing at cinemas nationwide from Saturday, May 20, 2017, has been officially selected to be screened at the world's premier animated film festival, the Annecy International Animated Film Festival, to be held in Annecy, France, between Monday, June 12, and Saturday, June 17, 2017.

We received this comment from Mr. Marcel Jean, Artistic Director for the Annecy International Animated Film Festival, who selected BLAME! for this special screening:
“The Annecy Festival is pleased to present BLAME! on the large screen. This is certainly the best animated science fiction feature we've seen in recent years. I was caught up in the force of the story from the first minute. This film is a classic to be!” (Marcel Jean)

One of the world's four big animated film festivals, along with Zagreb, Ottawa, and Hiroshima.
Established in 1960 from the animation category of the Cannes International Film Festival, and now the world's largest and most presigious animated film festival. Held every year in June in the town of Annecy, at the foot of the French Alps. At last year's festival, around 500 short- and long-form works from 85 different countries were shown, with 9,150 people in attendance. The MIFA marketplace is also held during the festival, where 2,800 industry professionals gather from 68 countries around the world. 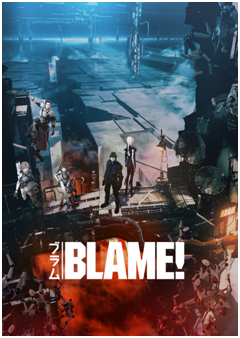 
Introduction
Tsutomu Nihei's visionary debut, which has continued to inspire creators around the world.


Story
In a future where technology has run rampant, humanity's only hope rests on a lone wanderer.