Godzilla of Godzilla: Planet of the Monsters shows his face!! The true form of Godzilla is finally revealed! Powerful battle scenes also revealed to the public! Visuals and preview trailer released!!

2016 saw the release of the no. 1 box office smash hit live action film, Shin Godzilla (directed by Hideaki Anno). This grounded portrayal captured the hearts of audiences, and has been honored with seven prizes at the 40th Japan Academy Awards, including Picture of the Year. The next step in the Godzilla franchise will be the release this November of Godzilla: Planet of the Monsters. This landmark year in which Japan celebrates the 100th anniversary of the release of its first animated film will also finally herald the first time in history that the challenge has been undertaken to adapt Godzilla into an animated feature.

The preview trailer has been released! Godzilla's face and form are revealed!

The preview trailer is now available on the web, ahead of being also shown in cinemas starting from Friday, 18th August! The full picture of the story which was not shown in the trailer released last month is now brought to light. The trailer shows bombing runs that reduce the ground to ashes, and air battles with hover troops in their attempt to face off against Godzilla in a frontal attack. It is a battle to the death between the human race and Godzilla!

The preview trailer starts with a monologue by the main protagonist, Haruo (played by Mamoru Miyano)—"In the last summer of the 20th century, the human race realized for the first time that they are not the only rulers of the planet Earth."
20,000 years have passed on Earth when the human race returns, and the world has changed to one in which Godzilla is at the top of the ecosystem. Seeing Haruo burning with desire to avenge his parents who were killed by Godzilla, Metphies (played by Takahiro Sakurai) warns him calmly—"He will not let humanity get away." That "he" which Metphies refers to is the "master" of Earth after 20,000 years, and we see his expression and his form moving for the first time in this preview trailer!
This power-packed preview trailer shows the start of this fated battle between the human race and Godzilla.


Poster visuals have also been released!

New poster visuals have also been released! Up until now we have only seen Godzilla's silhouette. This time, we see an enormous Godzilla in the background and the main characters, Haruo, Metphies, Yuko, and Galgu confronting him. Just as the catch copy states "Who will perish—Humans or Godzilla?" this visual shows the opening of an ultimate battle to the death between Godzilla, the god-like being enshrined in Earth after 20,000 years, and the human race who stands against him. 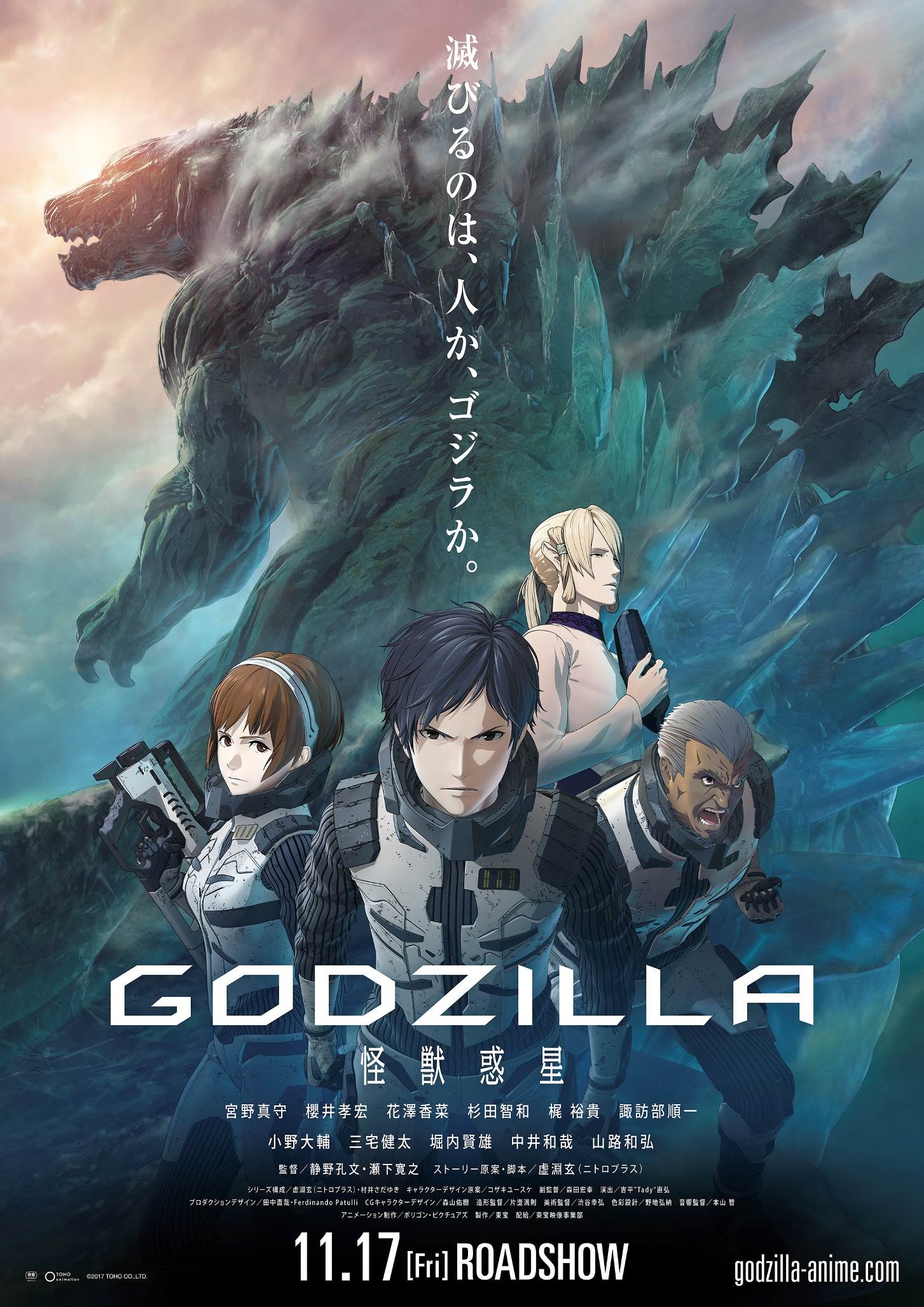 Godzilla is the largest life form ever recorded and possesses unique body tissue integrated with metal-like muscle fibers, which can generate a strong electromagnetic charge, to support his massive weight. The end result of natural selection on Earth, he originated from plant-based life and has gone on to survive 20,000 long years as a super-evolved living organism.

Ever since it was first released as a feature film in 1954, Godzilla has come to be a colossal cultural icon loved by millions around the world. 2016 saw the release of Shin Godzilla, directed by Hideaki Anno. This grounded depiction of the iconic monster story captured audiences and became a huge hit. Now in 2017, Godzilla continues to surprise with this evolution into a feature-length animated film.
This animated movie takes the franchise into uncharted territory; mankind's fateful confrontation to retake their planet in a distant future where Godzilla has dominated the Earth for 20,000 years.
Directing is Kobun Shizuno, whose theatrical release of Detective Conan: Crimson Love Letter achieved the highest box office success yet for that famed franchise. He is joined by another proven talent on the cutting edge of computer graphics, Hiroyuki Seshita, director and supervising director of Knights of Sidonia: Battle for Planet Nine and BLAME!. Penning both the story and screenplay is Gen Urobuchi of Puella Magi Madoka Magica and Psycho-Pass, a writer known to his large and loyal fan base as a master of meticulous and unpredictable storytelling laced with powerful ideas. Finally, handling the production is 5-time Emmy award winning Japanese 3DCG animation studio, Polygon Pictures, which produced Knights of Sidonia, and Star Wars: The Clone Wars for U.S. television and earning Outstanding Special Class Animated Program at the 40th Annual Daytime Emmy Awards. Prepare for the earth-shattering roar of a brand new Godzilla, unlike anything heard or seen before!

The final summer of the 20th century… when mankind learns it is no longer the sole ruler of planet Earth.
The planet is beset by the emergence of colossal creatures that roam the Earth, and king among them is "Godzilla". For a half a century, these beasts engage in ferocious battle with each other and mankind. Ultimately humanity, unable to compete, prepares for exile from its home planet. In the year 2048, a select few humans are chosen by the central government's artificial intelligence to set out on an interstellar emigration vessel, the Aratrum, on an 11.9-light-year journey for the planet Tau Ceti e. But when they arrive after 20 years of space travel, the remnants of mankind find the environmental conditions on Tau-e to be much worse than expected, and uninhabitable by humans.
On board the vessel is a young man, Haruo. When he was four years old, he saw his parents killed by Godzilla before his eyes, and in the 20 years since he has thought about nothing but returning to Earth and defeating Godzilla. With their chance for escape to another world closed, and living conditions on the ship deteriorating, Haruo spearheads a movement to return to Earth despite the dangers of such a long return trip.
Somehow, the Aratrum makes the return journey in one piece, but the home they return to has become an alien planet. 20,000 years have elapsed, and a new ecosystem has emerged with Godzilla at its apex. Can mankind take back its native planet? Will Haruo get his revenge?