Polygon Pictures (Head Office: Tokyo, Japan; President and CEO: Shuzo Shiota,) is proud to announce that the CG animated series, Star Wars Resistance, with animation produced by our studio, has been nominated for the Primetime Emmy Awards, the television industry's highest honors, for the second year in a row.

Star Wars Resistance is the latest Star Wars television series, with animation once again being produced by Polygon Pictures, who also created animation for the multi-Emmy Award-winning full 3D CG series Star Wars: The Clone Wars. Last year, Resistance received the award for Best Animated Series on Television at the 2019 45th Saturn Awards, and was also nominated in the Outstanding Children’s Program category at the 71st Primetime Emmy Awards, making this the second consecutive year it has been nominated.

Titles with animation created by our studio have won a total of five times in major categories at previous years' Daytime Emmys and International Emmy Awards, and this marks the second time one of our works has been nominated for a Primetime Emmy.

The 72nd Primetime Emmy Awards will be held remotely on September 20th (US time) from the Microsoft Theater in Los Angeles. 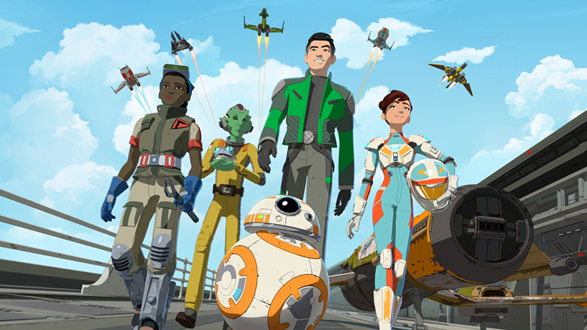 The series was created by renowned Lucasfilm Animation veteran Dave Filoni (Star Wars: The Clone Wars, Star Wars Rebels). Set prior to the events of Star Wars: The Force Awakens, this latest entry to the Star Wars canon presents a tale of thrilling sky races and tense aerial battles.

About the Primetime Emmy Awards

The Emmy Awards are presented annually by the National Academy of Television Arts & Sciences. Designed to recognize outstanding achievement in television, the award constitutes one of the industry’s highest honors. The Primetime Emmy Awards are one category of the Emmys, and this year’s awards will be considering shows which were broadcast in the United States between June 1st, 2019, and May 31st, 2020.
Official Site: https://www.emmys.com/
Outstanding Children's Program Award Nominees: https://www.emmys.com/awards/nominees-winners/2020/outstanding-childrens-program