Production of this work begins just as PPI celebrates the 30th anniversary of the studio's founding. We are thrilled at this opportunity to bring the years of knowledge and expertise gained from such series as Star Wars: The Clone Wars (Emmy Award winner) and Tron: Uprising (Annie Award winner) to this latest work. As a digitally produced work incorporating traditional Japanese cel animation techniques, this series also represents a new era in Japanese animation.

In keeping with our mission to "do what no other has done, in unparalleled quality, for all the world to see and enjoy," PPI continues to develop more advanced techniques of visual expression. Through the creation of new and inspirational works, we hope to convey the richness of Japanese culture to audiences around the world.

This popular sci-fi manga by Tsutomu Nihei is currently serialized in Kodansha's monthly magazine Afternoon. Ten volumes of the comic have been released in book form.
Story: It's been one thousand years since the Gauna, a strange alien race with no known method of communication, destroyed the solar system. A portion of humanity managed to escape using enormous "seed ships" like the Sidonia, which have allowed them to maintain the population as the ships drift through space. Nagate Tanikaze is a young man who has been raised deep in the bowels of the ship. When he goes into training to pilot the huge robotic weapons known as Gardes, Nagate is entrusted with piloting the legendary unit known as Tsugumori. Nagate and his fellow pilots put their lives on the line against the Gauna, in the ultimate battle for the survival of humanity! 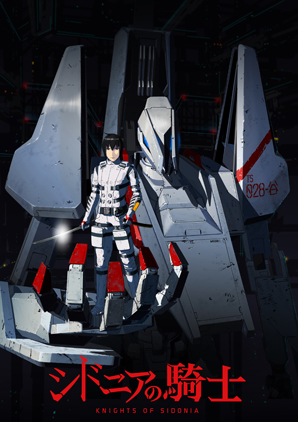 Tsutomu Nihei (manga creator): born 1971. In 1995, Nihei published a short one-off comic titled "BLAME!" in Kodansha's monthly magazine Afternoon. The story was selected by Jiro Taniguchi to receive a Special Judges' Award as part of Kodansha's Afternoon Shikisho Awards.
In 1997, BLAME! was picked up for serialization in Afternoon magazine and ran until 2003. Nihei's
best-known works also include BIOMEGA and NOiSE. Known for a unique, high-contrast style and mastery of scale, Nihei's works have gained popularity across the world. Knights of Sidonia is currently in publication in English, German, and Chinese as well as the original Japanese.

Polygon Pictures comprises one of the companies under the umbrella of Amana Holdings Inc. (President and Representative Director: Hironobu Shindo, Head Office: Tokyo, Japan, Securities Code: TSE Mothers 2402). Our main business focus is on providing digital content creation services. This year, we will celebrate the 30th anniversary of our founding.
Since its founding in July 1983, PPI's mission has been to "do what no other has done, in unparalleled quality, for all the world to see and enjoy." Our production studio brings together over 300 creators from around the world, who devote their days to producing cutting-edge digital content. In addition to long-form, fully CG television series such as Transformers Prime (39th annual Daytime Emmy Award winner), Tron: Uprising (40th annual Annie Award winner), and Star Wars: The Clone Wars (40th annual Daytime Emmy Award winner), PPI creates digital animation for films, video games, exhibitions, websites and smartphones. PPI also manages licensing for our studio's original character properties.
By fusing our unrivaled production know-how with the internationally recognized quality of Japanese animation, PPI aims to become a leading company in the content business.
For more information, visit our website at http://www.ppi.co.jp.