Our company will work to continue aggressively implementing digital animation, including technical development, as we seek to expand the Japanese animation business around the world. 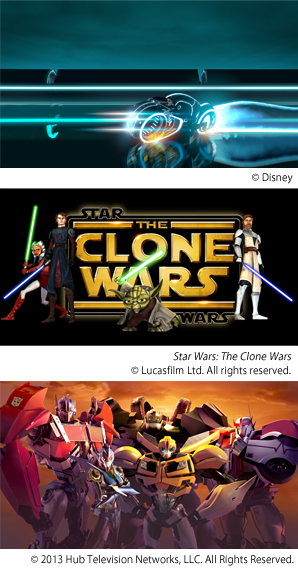 About Tron: Uprising
Tron: Uprising is an animated TV series set in between the events of the two Tron films. The show is broadcast in the United States on the Disney XD channel. Slick visuals and a star-studded voice cast, including Elijah Wood as the protagonist Beck, have made this one of the year's most talked-about new series. The show was picked up for broadcast in Japan and began airing on February 15, 2013, under the title Tron: Rising.

About Star Wars: The Clone Wars
The Clone Wars is a long-running animated TV show based on characters from the beloved Star Wars saga. Experience the epic battles and drama of the "Clone Wars" in this groundbreaking CG TV series.

About Transformers Prime
The Autobots, lead by their commander Optimus Prime, battle to protect humanity and the earth in fully CG robot battles. This blockbuster series ran for 3 seasons.

Polygon Pictures comprises one of the companies under the umbrella of Amana Holdings Inc. (President and Representative Director: Hironobu Shindo, Head Office: Tokyo, Japan, Securities Code: TSE Mothers 2402). Our main business focus is on providing creative, entertaining visual content services. This year we celebrated the 30th anniversary of our founding.
Since its founding in July 1983, PPI's mission has been to "do what no other has done, in unparalleled quality, for all the world to see and enjoy." Our production studio brings together over 300 creators from around the world, who devote their days to producing cutting-edge digital content. In addition to television series such as Transformers Prime (39th annual Daytime Emmy Award winner), Tron: Uprising (40th annual Annie Award winner), and Star Wars: The Clone Wars (40th annual Daytime Emmy Award winner), PPI creates digital animation for films, video games and exhibitions. In 2013 we established a joint company, "Silver Ant PPI Sdn. Bhd."To increase our production ability we are also upgrading and expanding our licensing business.

By fusing our unrivaled production know-how and technical development capacity, with the internationally recognized quality of Japanese animation, PPI aims to become a leading company in the content business.
For more information, visit our website at http://www.ppi.co.jp.