Ronia, the Robber's Daughter is a new animation TV series based on the fantasy novel by Swedish author Astrid Lindgren, one of the world’s most respected children’s authors, best known for the Pippi Longstocking series. The series will be directed by Goro Miyazaki, the director of the animated feature films Tales from Earthsea and From Up on Poppy Hill. Ronia, the Robber’s Daughter will be his first TV series. Polygon Pictures (“PPI” President and CEO: Shuzo Shiota Head Office: Tokyo, Japan) will be in charge of animation production for the series, scheduled for broadcast in Autumn 2014 on NHK BS Premium.

Based on: Ronia, the Robber's Daughter by Astrid Lindgren 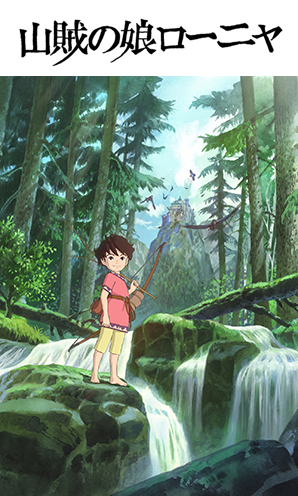 In Medieval Europe, Ronia is born as the only child of Matt, the chief of a clan of robbers in a large, ancient castle in grand woodlands. Under the loving care of her father, her mother and the clan of robbers, she grows to be a strong and active girl. One day, when Ronia is finally allowed to go into the woodlands for the first time, she discovers with much fascination the many mysterious creatures who live there. She learns how to live in the wildness with the help of her parents. Then she has a fateful encounter with a boy named Birk...
This tale of the growth of the young girl Ronia and her family will bring to children a new story of the joy of growing and of longing for the unknown, the love and hopes of parents for the growth of their child, and of the conflicts and reconciliations of parents and children.

Polygon Pictures comprises one of the companies under the umbrella of Amana Holdings Inc. (President and Representative Director: Hironobu Shindo, Head Office: Tokyo, Japan, Securities Code: TSE Mothers 2402). Our main business focus is on providing creative, entertaining visual content services. Last year we celebrated the 30th anniversary of our founding. Since its founding in July 1983, PPI's mission has been to "do what no other has done, in unparalleled quality, for all the world to see and enjoy." Our production studio brings together over 300 creators from around the world, who devote their days to producing cutting-edge content. Our representative works include television series such as, Transformers Prime (39th annual Daytime Emmy Award winner), Tron: Uprising (40th annual Annie Award winner), Star Wars: The Clone Wars (40th annual Daytime Emmy Award winner) and more. By fusing our unrivalled production know-how and technical development capacity with the internationally recognized quality of Japanese animation, PPI aims to become a leading company in the content business. For more information, visit our website at http://www.ppi.co.jp.