Animated TV series Knights of Sidonia
to be shown on Singapore Airlines!

It will be shown for a period of four months, from March 1 to June 30, 2015. All 12 episodes (Japanese audio, English subtitles) will be viewable on Singapore Airlines' award-winning inflight entertainment system, KrisWorld, across its global network spanning 60 cities in 30 countries. Singapore Airlines will be the first airline to show Knights of Sidonia on its inflight entertainment, and an exclusive premiere is planned during the month of March.

Singapore Airlines covers a network spanning more than 60 cities in 30 countries. Since its founding in 1972 it has gained a reputation for its high level of service, and has been ranked as one of the world's "5-Star airlines".

This popular mecha sci-fi manga by Tsutomu Nihei is currently serialized in Kodansha's monthly magazine Afternoon. Thirteen volumes of the comic have been published in book form, and the animated TV series was broadcast in Japan April-June 2014 on MBS and other channels. Also, from March 6, 2015, the theatrical edition Knights of Sidonia: The Movie will begin screening, followed by the continuation of the TV series with Knights of Sidonia: Battle for Planet Nine, starting April.


Story: It's been a thousand years since the Gauna, a strange alien race with no known method of communication, destroyed the solar system. A portion of humanity managed to escape using enormous "seed ships" like the Sidonia, which have allowed them to maintain the population as the ships drift through space. Nagate Tanikaze is a young man who has been raised deep in the bowels of the ship. When he goes into training to pilot the huge robotic weapons known as Gardes, Nagate is entrusted with piloting the legendary unit known as Tsugumori. Nagate and his fellow pilots put their lives on the line against the Gauna, in the ultimate battle for the survival of humanity! 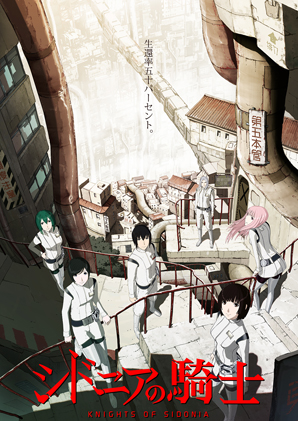