Tron: Uprising and Star Wars: The Clone Wars
Snag 4 Nominations Each at the Annie Awards!
CG Animation by Polygon Pictures

Polygon Pictures (“PPI,” President and CEO: Shuzo Shiota, Head Office: Tokyo, Japan) is proud to announce that the television series Tron: Uprising and Star Wars: The Clone Wars, both with CG animation produced by our studio, received four nominations each at the 40th Annie Awards.

The awards ceremony for the 40th Annie Awards will be held on Saturday, February 2, 2013, in Los Angeles.

In keeping with our stated mission to “do what no other has done, in unparalleled quality, for all the world to see and enjoy,” PPI will continue striving to launch Japan's renowned animation business on a global scale. 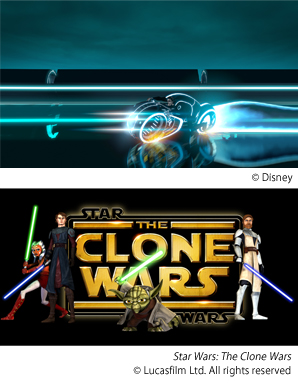 Tron: Uprising is an animated TV series set in between the events of the two Tron films. The show is broadcast in the United States on the Disney XD channel. Slick visuals and a star-studded voice cast, including Elijah Wood as the protagonist Beck, have made this one of the year's most talked-about new series.

The Clone Wars is a long-running animated TV show based on characters from the beloved Star Wars saga. Experience the epic battles and drama of the “Clone Wars” in this groundbreaking CG TV series.

Polygon Pictures comprises one of the companies under the umbrella of Amana Holdings Inc. (President and Representative Director: Hironobu Shindo, Head Office: Tokyo, Japan, Securities Code: TSE Mothers 2402). Our main business focus is on providing digital content creation services.
Since its founding in July 1983, PPI's mission has been to “do what no other has done, in unparalleled quality, for all the world to see and enjoy.” Our production studio brings together over 300 creators from around the world, who devote their days to producing cutting-edge digital content. In addition to long-form, fully CG television series such as Transformers Prime (Daytime Emmy Award winner), Tron: Uprising, and Star Wars: The Clone Wars, PPI creates digital animation for films, video games, exhibitions, websites and smartphones. PPI also manages licensing for our studio's original character properties like the popular penguin duo Rocky & Hopper.
By fusing our unrivaled production know-how with the internationally recognized quality of Japanese animation, PPI aims to become a leading company in the content business.
For more information, visit our website at http://www.ppi.co.jp.