Polygon Pictures ("PPI," President and CEO: Shuzo Shiota, Head Office: Tokyo, Japan) is proud to announce that our animation work will be featured in the upcoming film Kiiroi Zou (Yellow Elephant), directed by Ryuichi Hiroki and based on a novel by Kanako Nishi. The movie opens nationwide in Japan on February 2, 2013.

The film features several animated sequences based on the picture book of the same title, also drawn by Nishi. These visually entrancing scenes bring to life the troubles and fantasies of the female protagonist Tsuma, played by actress Aoi Miyazaki. The Animation Director was Yoshiko Misumi, who is known for the sensitive use of color reflected in her drawings. Her animation perfectly captures the unique, whimsical spirit of the original picture book's crayon illustrations.

At PPI, we place a high value on projects like this one that allow us to challenge ourselves in a wide variety of genres while expanding our singular knowledge and expertise.

About the film Kiroi Zou

This live-action adaptation of Kanako Nishi’s third novel, Kiiroi Zou, tells the story of a loving young couple, Tsuma and Muko. The role of Tsuma is reportedly a dream come true for actress Aoi Miyazaki, who is quoted on the original Kiiroi Zou book jacket as saying she hoped to play Tsuma one day. Osamu Mukai takes on the role of her husband, Muko. The ubiquitous young actor has also listed the novel as one of his favorites in an interview with literature magazine Da Vinci.
The film is directed by Ryuichi Hiroki, known for his sensitive portrayals of love in all its forms, through works like Yomei Ikkagetsu no Hanayome (April Bride), Raiou (The Lightning Tree), and Keibetsu (Scorn). Hiroki is fully in his element as a director in this tale of a newly married couple who find that the deeper their love grows, the more they drift apart. 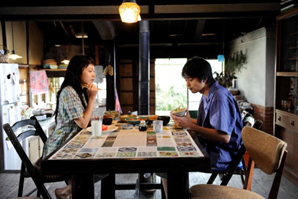 A Fukuoka native, Misumi went on to complete the graduate program in animation at Tokyo University of the Arts. Her acclaimed thesis work, Googuri Googuri, netted multiple awards at film festivals both in Japan and abroad. She is currently active as an illustrator and author of picture books, in addition to creating animation for the NHK series Minna no Uta, Okaasan to Issho and Ousama Monogatari.

Polygon Pictures comprises one of the companies under the umbrella of Amana Holdings Inc. (President and Representative Director: Hironobu Shindo, Head Office: Tokyo, Japan, Securities Code: TSE Mothers 2402). Our main business focus is on providing digital content creation services. This year, we will celebrate the 30th anniversary of our founding.
Since its founding in July 1983, PPI's mission has been to "do what no other has done, in unparalleled quality, for all the world to see and enjoy." Our production studio brings together over 300 creators from around the world, who devote their days to producing cutting-edge digital content. In addition to long-form, fully CG television series such as Transformers Prime (Daytime Emmy Award winner), Tron: Uprising, and Star Wars: The Clone Wars, PPI creates digital animation for films, video games, exhibitions, websites and smartphones. PPI also manages licensing for our studio's original character properties like the popular penguin duo Rocky & Hopper.
By fusing our unrivaled production know-how with the internationally recognized quality of Japanese animation, PPI aims to become a leading company in the content business.
For more information, visit our website at http://www.ppi.co.jp.