[Seminar] Film Production and the Future of Procedural

Seminar Title:
Film Production and the Future of Procedural

Seminar Content:
In the past few years as the scale of film production has continued to increase, implementation of efficient procedural methods has become more and more important.
In this seminar, we will discuss how procedural methods are being effectively incorporated into studio workflows, as well as future developments and give our audience working examples from a number of companies on the "future of procedural". 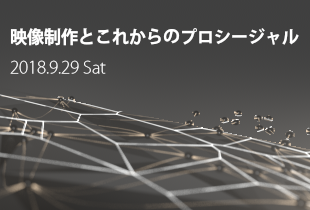 We stopped accepting applications because there is no more place available. Thank you for your application.

Founded in 1997 with the vision of "making 'amazing' happen", Anima is a studio focused on creating original works through high-quality CG animation.
Original works include CAT SHIT ONE - THE ANIMATED SERIES, in addition to overseas projects such as the recent collaborations with Riot Games in the creation of Star Guardians and A New Horizon, promotional videos for League of Legends, the world's largest online game.
In 2015 Anima announced a partnership with Tonko House Inc. (Co-owners: Daisuke Tsutsumi, Robert Kondo) - creators of The Dam Keeper, nominated at the 2015 Academy Awards in the Animated Shorts category; and in March 2018 with Studio Toa Co. Ltd. - a studio using 3dCG in manga creation led by manga artist Yasuo Otagaki.
For more information, visit their website at http://www.studioanima.co.jp

OMNIBUS JAPAN is a digital production that specializes in the total production of visual works based in postproduction, CG, and VFX.
We have produced many major works including feature films, advertisements, TV shows and exhibition visuals.
The creative production of OMNIBUS exceeds the limits of traditional mediums through technical development in fields such as spherical visuals, dome visuals, information art, VR, AR etc...
http://www.omnibusjp.com/

For over thirty years, SideFX has been providing artists with procedural 3D animation and visual effects tools designed to create the highest-quality cinematic results. We are passionate about what our customers do because our roots are in production, both as artists and as pioneering technical innovators.
https://www.sidefx.com/

Studio Phones is working on the feature film "homes", for which promotion will begin in 2020.
As a small studio, they aim to focus their efforts on creating unique content. For more information, the website https://studiophoneshomes.com is planned to open in 2020.

Founded in July 1983, Polygon Pictures is one of the largest digital animation studios in Japan and produces cutting-edge entertainment content in keeping with our mission to "do what no other has done, in unparalleled quality, for all the world to see and enjoy." Including our Malaysian subsidiary studio Silver Ant PPI Sdn. Bhd., we have brought together over 400 creators from around the world. Utilizing the latest technologies, they pool their talents and passions to create new content. Our notable works include GODZILLA: Planet of the Monsters, Knights of Sidonia, Ajin, BLAME!, Transformers: Robots in Disguise, Lost in Oz, Pingu in the City, and more.
By fusing our unrivalled technical and production planning know-how with the internationally recognized quality of Japanese animation, Polygon Pictures aims to become a leading company in the content business. For more information, visit our website at http://www.ppi.co.jp.